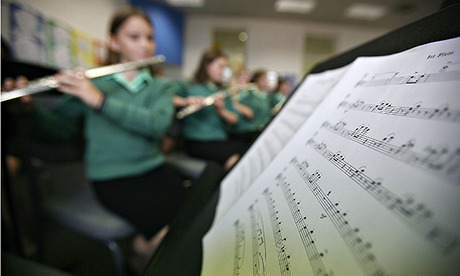 Research has found that children who study music before the age of seven develop bigger vocabularies, a better sense of grammar and a higher verbal IQ. Photograph: Christopher Furlong/Getty Images

Today's economic environment demands that our children become the very best they can be. A lot of demands are placed upon us as parents, and whether we like it or not, we need to help our children navigate their way in today's fast-paced world and build their skills for the future. But not all methods, from flashcards to baby signing, actually boost a child's intelligence, language skills or other abilities for success. Reading through many research papers from peer-reviewed scientific journals, I discovered that music training is the only proven method to boost the full intellectual, linguistic and emotional capacity of a child.

Thankfully, for the sake of the stress levels of parents and children, for the whole-brain boost, there is no need to emulate Tiger Mother Amy Chua who pushed her children to play classical instruments for several hours a day, often prompting tearful tantrums from her daughters. According to the studies, just one hour a week of learning music is enough for the full brain benefits to take place – including an all-round boost in language skills and a significant increase in IQ.

In my birth country, Finland, the average person speaks three to five languages – after all, no one understands our obscure native tongue. But Finland's peculiar custom of early music training where even babies and toddlers learn core music skills through songs and games, may also influence the fluency of foreign-language speaking Finns. As music training boosts all the language-related networks in the brain, we would expect it to be beneficial in the acquisition of foreign languages, and this is what the studies have found.

When children start studying music before the age of seven, they develop bigger vocabularies, a better sense of grammar and a higher verbal IQ. These advantages benefit both the development of their mother tongue and the learning of foreign languages. During these crucial years, the brain is at its sensitive development phase, with 95% of the brain's growth occurring now. Music training started during this period also boosts the brain's ability to process subtle differences between sounds and assist in the pronunciation of languages – and this gift lasts for life, as it has been found that adults who had musical training in childhood still retain this ability to learn foreign languages quicker and more efficiently than adults who did not have early childhood music training.

Humans first started creating music 500,000 years ago, yet speech and language was only developed 200,000 years ago. Evolutionary evidence, as interpreted by leading researchers such as Robin Dunbar from Oxford University, indicates that speech as a form of communication has evolved from our original development and use of music. This explains why our music and language neural networks have significant overlap, and why children who learn music become better at learning the grammar, vocabulary and pronounciation of any language.

The benefits are not just for those of us whose mother tongues are obscure. Even for English speakers, there is a growing interest in the advantages that come with learning foreign languages. There are many languages that can benefit us in immense ways, from culture to trade – Chinese, Russian, Arabic, French and Spanish to name but a few – and what better way to ensure your child can pick up all these languages than by teaching them the master language that transcends all others: music.

Music training plays a key role in the development of a foreign language in its grammar, colloquialisms and vocabulary. One recent study found that when children aged nine and under were taught music for just one hour a week, research concluded that they exhibited a higher ability to learn both the grammar and the pronunciation of foreign languages, compared to their classmates who had learned a different extracurricular activity.

Finnish children are commonly musically trained from a young age (up until the age of seven) with the playful Musiikkileikkikoulu method, but they only start school at age seven and start language learning at nine or older. Despite this "late exposure" to everything excluding music skills, they commonly end up speaking three to five foreign languages. Any English-speaking person who has ever visited Finland can attest to the fact that nearly every Finnish person speaks English without any problems. My contention as an average Finn who speaks four languages is that speaking languages is fun – it allows you to engage with different cultures from an insider's point of view.

Take Ken Stringfellow, the American singer-songwriter known for his work in the Posies and REM, as an example of the impact of music on the ability to learn foreign languages. Ten years ago, well into his thirties, he married a French woman and subsequently picked up a whole new language from scratch. Recording with him in Paris, at first I was amazed at how he had learned it so well without any prior background, compared with my 12 years spent studying French at school; but the research explains it. As a musician who made music from toddlerhood, he would have significantly boosted his brain's capacity for the syntax, semantics and pronunciation of learning any new language in adulthood.

We must not forget that our children often learn the most when they are engaging in free play and discovering the world for themselves. The combination of a bit of music training and a lot of free play certainly has not harmed the Finns, who in the OECD's Pisa tests are among the top students in the world not just in their language skills, but in their abilities in mathematics, literacy and science.

The future and its economic demands may be uncertain, and there may be a lot of pressure on us parents, but one thing is certain: in order for our children to thrive, we need not impose this pressure on them. The brain takes care of its own development, with a little bit of music and a lot of love and free play.

Liisa Henriksson-Macaulay is the author of The Music Miracle: The Scientific Secret to Unlocking Your Child's Full Potential